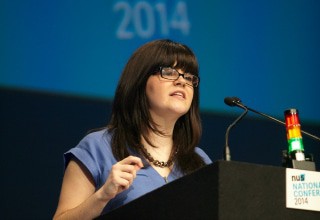 Megan Dunn has been elected the new vice president of higher education for NUS at National Conference 2014.

In her election speech, Megan spoke about making the higher education zone inclusive for all activists.

“Learning and teaching is political”, she argued. “Classrooms are not neutral”.

She focussed on the recent news of heightened tuition fees having resulted in no apparent savings for the state. This was actually news four years ago, when we told them so, she argued during her speech.

“But ‘I told you so’, isn’t enough”, she went on to say. “It’s not a victory, but it is an opportunity”, outlining her vision for leading the higher education zone.

Megan Dunn was elected vice president for higher education of NUS, with the vote count being:

Watch National Conference live here, and follow all the latest news on Twitter with the hashtag #NUSNC14